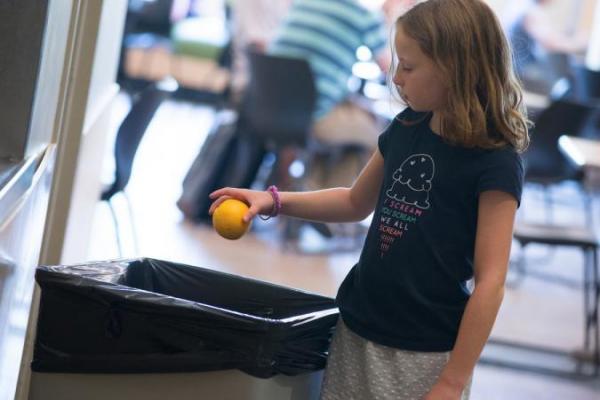 I was in a school cafeteria recently, watching with dismay as kids threw fresh fruits and salads in the garbage.  I asked one of the teachers I was working with about it, and she said that the school had been mandated to include healthy foods, but that most kids still weren’t eating those foods and were going for pizza and burgers instead.

Now President Trump’s Agriculture Secretary, George Perdue, is talking about rolling back Michelle Obama’s Healthy Schools Initiative for just such a reason.  “If kids aren’t eating the food, and it’s ending up in the trash, they aren’t getting any nutrition—thus undermining the intent of the program,” Perdue stated at an elementary school in Virginia.

While I am not a fan of waste—or of mandates—I think a rollback is a mistake.  Just because our first attempt at shifting eating patterns in American schools is not working does not mean we have to throw our hands up in defeat and declare that it can’t be done.

It can be done.  I have seen it—and tasted it—in action, in real life, in a real school.

The Village School in Eugene, Oregon has been serving meals cooked from scratch using mostly whole, organic and local foods for years.  This food ends up in student and staff bellies—not the garbage can.  While I haven’t conducted any scientific surveys to discover if these kids are happy to be eating this food and not to be eating the processed foods offered to them by other schools in the district, I have seen a lot of happy faces in their cafeteria and seen trays piled high with fresh fruits and vegies from their salad bar.

The Village School’s path to a healthy vibrant scratch-cooked lunch program was not easy.  It took years and lots of volunteer hours from dedicated parents and staff to establish their program.  They needed to build the community infrastructure to ensure that local, organic foods were available and affordable.  This took enrolling a lot of people into contributing to the school and donating food resources. It is proof, however, that it can be done.

It is possible to convince American children to forgo pizza and hamburgers in favor of Yumm bowls (a beans, rice, and vegie bowl with Eugene-based Café Yumm sauce on top) and to get them to eat more fruits and vegetables.

It is even possible to convince myself to eat that way.

I am a classic example of the failure of the standard American diet to produce health and vitality.

I have been struggling with my weight and with food issues since I entered puberty.  The rest of the members of my family were thin.  I ate what they ate and became obese.

Like my family, I assumed this was because I ate more than they did and exercised less.  They urged me to eat less and exercise more.  Their comments only served to make me feel that there was something wrong with me, a feeling that I often chose to mask through eating.

I have tried repeatedly throughout the years to remedy this situation either through increasing exercise or decreasing food consumption.

I haven’t successfully sustained either strategy.

It was only when I quit eating refined carbohydrates that I was able to lose weight and keep it off.  I felt like I had discovered the secret to the universe and reveled in my increased health and decreasing waistline.  Unfortunately, I wasn’t able to sustain a diet that did not include processed foods when the rest of my world kept eating them.

I am now in the process of getting back into the game of learning to be healthy and eating in a way that produces health, vitality, and wellbeing.  I am clear that this means learning to okay with eating very differently than my colleagues, friends, and family.

I have spent years throwing up my hands in defeat and feeling like it was just too hard to change my habits.  But it is time to put my belief in the power of learning into action and learn my way to health.

There is so much more information about how food works in the body that wasn’t available even a few years ago.  I am finding that the more I immerse myself in the science of digestion and in the neural control of appetite, the more excited I am to develop a way of eating that does not include processed foods and is different than the way my friends eat.

There was a time when I couldn’t envision a future without ice cream.  Now, such a future is beginning to seem brighter than one with it—because I am recognizing the cost I am paying for that indulgence.

So what do the success of the Village School and my own struggles to develop healthy eating habits have to do with Secretary Perdue’s decision that we shouldn’t move forward with our mandate to ensure that the foods we provide to school children in America are actually good for them?

Both cases serve to highlight the power of learning and the power of culture to influence what goes into people’s mouths.  Eating is a highly social activity.  What we eat is usually strongly influenced (often at a subconscious level) by what those around us eat.

You cannot mandate good food choices.  Simply telling people to eat better doesn’t usually work.  It certainly did not work for me.

But that doesn’t mean we just give up and let the food industry have full sway in our school cafeterias.  Instead, we can empower our school communities to continue engaging in the process of attempt-fail-analyze-adjust-and attempt again in a journey to creating cultures that value health over convenience.

The Village School accomplished this through bringing the whole school community on board in their process to develop their school lunch program.

I am accomplishing it through educating myself and conducting experiments in my own life to determine what actually works and what eating habits I can sustain long-term.

If the government says that schools are not mandated to provide healthy foods for their students, then it is time for school communities and leadership teams to take up the baton and work as professional learning communities to figure out how to help students develop the knowledge and life skills to take charge of their health and make life-sustaining choices for themselves.

Sharing our thinking about literacy learning

thoughts on education by Grant Wiggins

Change for the better

Crawling Out of the Classroom

In everything that my students and I do together, we strive to find ways to use reading and writing to make the world outside of our classroom a better place for all of us to be

Advancing the Theory and Practice of Self-Determined Learning

Complicating the canon and empowering students through poetry

Mercedes Schneider's Blog: Mostly Education, with a Smattering of Politics and Pinch of Personal

The Diary of a Not So Ordinary Boy

My world, its ups and downs